Last week, two dozen students and four advisers from Penn State Behrend participated in an Alternative Spring Break service trip to Puerto Rico. The group helped residents recover from the catastrophic flooding that occurred as a result of Hurricane Maria, a category 5 hurricane which devastated the area in 2017, causing billions of dollars in damages and claiming nearly 3,000 lives in Puerto Rico. Here is a reflection on the week’s activities from one of the participants.

On the second day of the trip, we began our service. We headed to a part of the El Yunque where Hurricane Maria had stripped the natural canopy from parts of the forest. Strong grasses and vines took over the hiking trails. We worked to remove the excess brush to expand the trails. 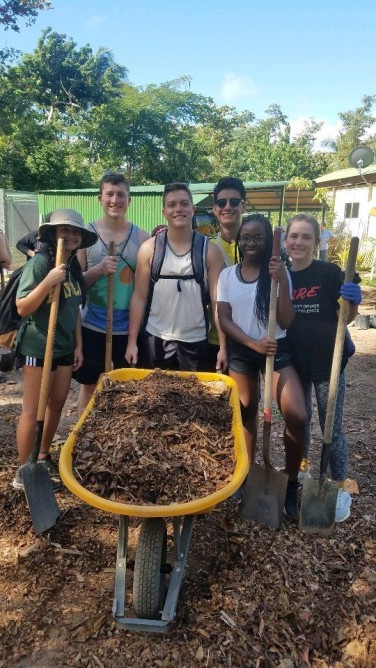 On the third day, we split into teams to paint houses that had suffered external damage from the hurricane. One team rolled a fresh coat of orange onto a home, while another worked to paint a new house, which was built after the hurricane destroyed the original home.

The fourth day was spent finishing up the painting of the orange house and cleaning up. Another team painted the kitchen of a nearby home where the walls had been re-plastered due to water damage. The final group spent the day working on landscaping.

Our last day of service was spent at the Natural Reserve Cabezas de San Juan. We learned lot about the post-hurricane reforestation efforts that are being undertaken to revitalize the plant and wildlife in the area. We helped to tag young trees and tend to the newly planted ones by spreading mulch and watering them.

On our cultural day, we were able to explore coral reefs and learn about the ecosystem that they exist in. Snorkeling in the beautiful Puerto Rican waters allowed us to get an up-close-and-personal feel for the sea creatures and other wildlife. A friendly dolphin even paid us a visit.

We had a few hours before leaving for the airport, so we explored Old San Juan.

It was such an amazing experience being able to meet and interact with the kind, resilient people of Puerto Rico. The Behrend students took every opportunity with smiles on their faces and love in their hearts.

We are grateful to all the donors and others who made this service trip possible.