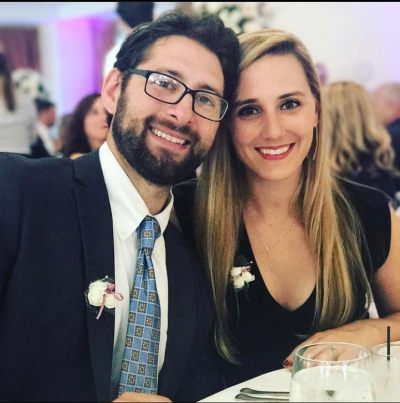 While a lot of professionals pursue an advanced degree as the next step in their career trajectory, they sometimes spark personal projects as well.

By day, Jacqueline Masek DiPlacido ’18 M.B.A., works at Parker LORD as a program manager/production planner for the company’s aerospace new products team. But, on evenings and weekends, she puts her Penn State Behrend Master of Business Administration degree to work helping to build DA Woodworking, a small business she owns with her husband, Bob.

DiPlacido, who earned a degree in Supply Chain Management at Penn State’s University Park campus, said what started as a hobby for her husband, who works as a mechanical engineer, has grown into a serious business. DA Woodworking currently has pieces on sale at Traditions Unlimited, an Erie home décor store.

DiPlacido helps design the pieces and market the business, something she learned a lot about in her MBA classes.

“We have worked hard to advertise the business without an advertising budget, using social media and leveraging word-of-mouth as we complete pieces for customers in the area,” she said. “We were planning to host a Gallery Night for the Erie arts community in the spring of 2020, but COVID-19 forced that event to be canceled.”

DiPlacido said she and her husband also hit on another winning formula – giveaways, which are even more popular when paired with a charity.

“I am an avid dog lover and volunteer for the Erie Humane Society,” she said. “I knew how many of their fundraisers were canceled last year, and Bob and I wanted to help. So, we combined our love for woodworking with our love for animals and built a custom coffee table that we donated to the humane society to raffle off.”

DiPlacido has plans to help Behrend’s alumni organization as well, once events can be resumed.  “We always enjoy giving back, and every time our pieces are showcased at an event, it gets our name out there.”

The new year brings yet another new challenge for the DiPlacidos. “We are expecting our first baby this year, so we’re in the middle of some great projects around the house!”

Faculty and staff recommend television worth watching over winter break 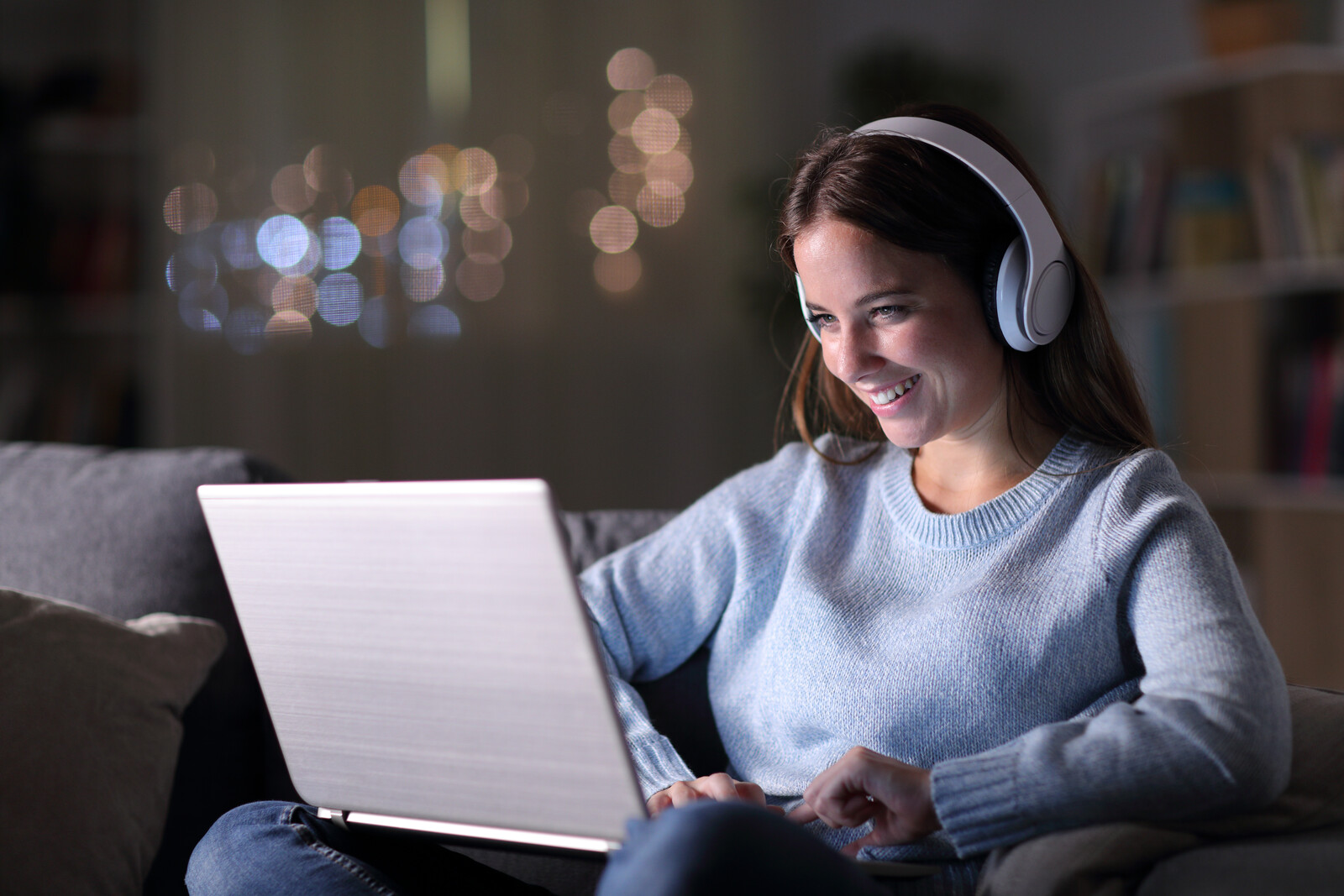 If you ask Penn State Behrend faculty and staff members what television shows or movies they’d recommend students enjoy over break, they’ll often suggest books instead. (You can take the professor out of the classroom, but…). If you press them, though, they may admit to occasionally indulging in a few flicks or bingeing on a streaming series, whether it’s something with an educational aspect to it or something that’s just plain fun to watch.

Here are the shows/movies that Penn State Behrend faculty and staff members recommend relaxing with over your well-earned holiday break. Please note: These suggestions are for adults; some shows may not be appropriate for younger audiences.

I recommend students watch the series Cobra Kai, a martial arts comedy-drama on Netflix, because we could all use a little more physical activity and inspiration in our lives right now.

I have to add a prerequisite, though: You must first watch the original Karate Kid movies (I and II)  so you can appreciate the series, which is based on the 1980s-era movies and features the main characters from the films.

Here are my recommended shows, all on Netflix, but some may be found elsewhere, too.

Occupied. This is a Norwegian political thriller that involves climate change and Russian subterfuge.

Learn something about European politics from this series, which includes all the elements of any political drama – sex, violence, and assassinations – mixed with efforts to save the environment.

Kim’s Convenience. Laugh while learning how everyone fits into a multicultural city in Canada in this funny sitcom about a Korean-Canadian family who owns a convenience store in Toronto.

Bodyguard. Learn a little bit about British politics and the civil service while trying to solve a mystery in this political thriller centered around the bodyguard of an ambitious government minister.

Evil Genius – This is a true crime documentary about the most famous criminal case to take place in Erie in the last quarter century. It tells the odd tale of a bank robbery heist that ended in the death of a pizza deliveryman who died when a collar bomb exploded around his neck.

I’m a big sci-fi fan, so I recommend any of the Star Trek movies or series, as well as Farscape and Babylon 5.

Not only are all of these shows incredibly entertaining, but they also provide us an opportunity to examine the social issues we discuss in psychology, sociology, political science, and anthropology in a way that allows us to escape the constraints of real life.

There are significant ethical dilemmas, interpersonal conflict, issues related to discrimination and oppression, and more. It also allows us to see the strengths and weaknesses of different ways of approaching life and various moral and religious compasses. Also, there are transporters!

Breaking Bad is an older television series about a chemistry teacher with cancer who resorts to cooking meth to make as much money for his family as he can before he dies. The show features plenty of chemistry and science, but also a lot of drug use, swearing, and violence, so it’s definitely not appropriate for younger audiences!

Two great movies that I’d recommend: Radioactive, a movie on Amazon Prime, is about the famous scientist, Marie Curie, and it delves into her life and the aftermath of her discoveries. Hidden Figures is a 2016 movie about three brilliant  African-American women at NASA who helped put John Glenn on the moon, though their efforts went largely unnoticed, hence the title of the movie.

I find nature documentaries soothing, so I’d suggest students watch the Our Planet series. It’s actually on YouTube right now as Netflix allowed it to be placed there so educators could access it for free during the pandemic.

The series focuses on how climate change affects various species in every habitat on Earth. Those who enjoy animals or are interested in climate change and the environment would enjoy the series, which isn’t too science heavy.

My wife and I have been enjoying a related set of historical fiction series over the last few months. These miniseries, available on a few premium streaming services such as Starz, Hulu, and YouTube, each portray drama related to the monarchy of England during the time period from about the mid-1400s to the early-1500s.

I’d suggest watching them in the following chronological order:

During Behrend’s recent International Education Week programming, we did a “daily digest” which, among many things, included some recommendations from the experts on ways to learn interculturally.

Here are some TED talks they recommended that students may want to check out while they are on break:

You can find a whole collection of  TED talks (and more) on the topic of diversity at ted.com.

Earth, Wind & Fire is just one of the many tools Chris Viscuso, the college’s new coordinator of strength training, uses to motivate his student-athletes.

“I try to make it fun and keep things lively and upbeat,” he said. “I make them listen to my music, which drives them nuts. They tease me about it, and I’ll say, ‘Hey, this group is in the Rock & Roll Hall of Fame. If you can tell me who it is, you can cut your workout short.’”

Rare is the 20ish-age college student who gets to skip out of strength training early.

Like any good coach or fitness guru, Viscuso takes an approach that mixes pleasure with pain, walking  a line between the two. He looks the part of a bodybuilder—he’s bald, bearded, muscled, and tattooed. He’s often grinning, but with just enough seriousness to convey without words that if you slack off, he’s going to call you on it.

Throughout December, an Elf on the Shelf perched on the bleachers in Erie Hall, where additional fitness equipment is set up for students. Viscuso’s elf didn’t move very much, but every day the holiday mischief-maker posted a new workout.

“Sometimes, he was a kind elf and it would be an easy workout,” Viscuso said. “Other times, he was an angry elf in a bad mood, and he’d make students do 150 body squats, run a half mile, and crank out some push-ups and pull-ups.”

Viscuso joined Behrend’s Athletics staff in September of 2020. It was a homecoming for the 1992 History graduate who had played basketball for the Behrend Lions. He has bragging rights as the first player to score a basket in the newly renovated Erie Hall when it reopened in 1992.

Nearly twenty years later, Viscuso is back in Erie Hall, though the building will soon be replaced by a new fitness and recreation center. It’s bittersweet for Viscuso, since he has made a lot of memories in Erie Hall.

He has several more months to imprint that facility on the college’s student-athletes, though, and he’s making the most of it.

“I’m the only ‘coach’ on staff who works with all 300 of our student-athletes,” he said. “And, I get to work with them year-round, not just when they are in season.”

One could argue that good athletes are built in the off-season.

“If you get stronger, you’re going to be a faster runner, a more explosive basketball player, a better soccer player,” he said. “There is not a sport you can play that you can’t play better with a stronger body.”

Like his musical taste, Viscuso is old-school when it comes to building stronger bodies. He likes the classic moves.

“The biggest mistake people make when it comes to strength training is making it too complicated,” he said. “Fads come and go in fitness, but the basics never really change. I’m going with meat-and-potatoes workouts – lunges, plyometrics, squats, sprints, pushups, etc. We use the weight room, but we also just add weight doing movement-based workouts.”

He likes to work unilaterally. “We do a lot of one-legged squats and one-arm dumbbell exercises, things like that,” Viscuso said.  It’s important for almost all athletes, but especially those who do a lot of pivoting on the playing field, like those in basketball, soccer, and tennis.

He’s also big on flexibility, another thing that benefits every athlete. “If your heels are coming off the ground when we are doing squats, everybody thinks of hips and sometimes it is that, but it can also be tight Achille’s tendons; all of these parts are in play.”

That’s why Fridays are for yoga, but if student-athletes think they are going to find inner peace, Viscuso sets them straight pretty quickly. “It’s actually more stretching and more of workout than they expect,” he said.

You might call Viscuso’s approach intense, and he’s perfectly OK with that. It’s one of his three ingredients to success. “Intensity, effort, and enthusiasm are key,” he said. “It’s hard to stop a determined man or woman.” 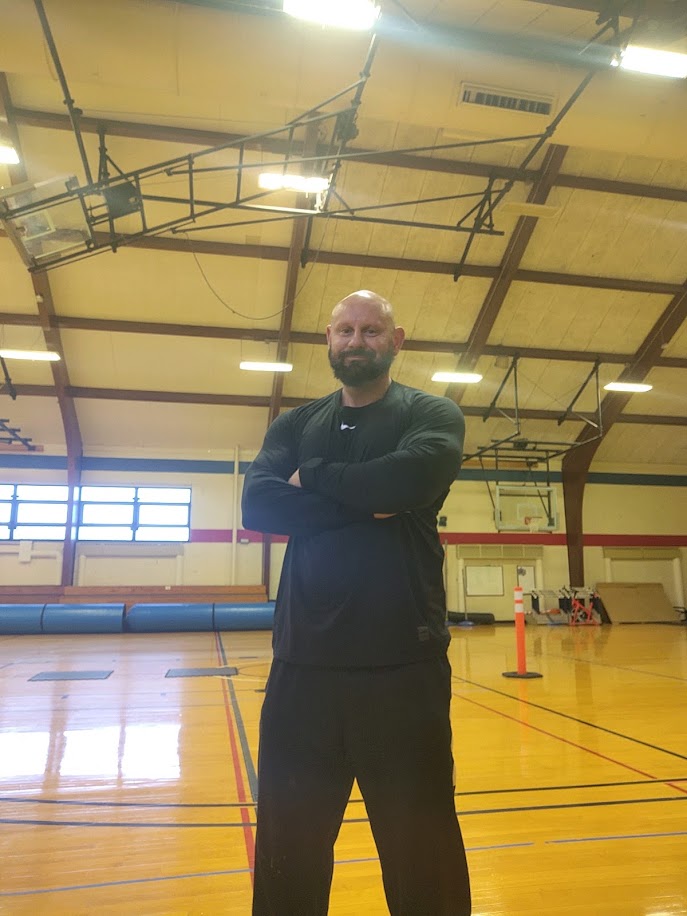 Before Behrend: Assistant basketball coach at Brescia University in Owensboro, Kentucky, then at Gannon University in Erie for fourteen years. At Gannon, he also served as the director of performance enhancement for the men’s basketball team, too.

On one measure of athletes: “I ask them to do 40 unbroken pushups and 10 pullups on their own; it’s not a huge challenge, but it tells me where they are, physically. Then we have a starting point.”

On pandemic-era training: “With no sports happening right now, it’s been a great time for strength training. Our philosophy has been, let’s just work on getting stronger, then.”

On a long winter break: “I told the student-athletes, ‘I’ve spent months working on you. Don’t you go home and let it all go. Do the workouts I post on Instagram (a private page for student-athletes).’ I’ll know if they didn’t.”

On Behrend student-athletes: “As a whole, our athletes have impressive GPAs, unheard of in sports-scholarship-level schools. Personally, I have found them to be hungry for information; they love feedback. In general, they are just good kids—smart, hardworking, respectful.”