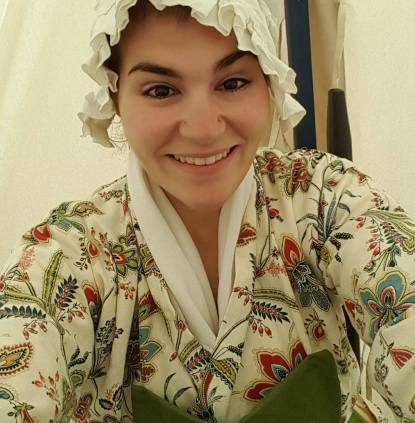 Most weekdays, you can find Talia Smock at her desk in the School of Science office, where she is an administrative support assistant. However, on some weekends, she steps back in time and becomes a completely different kind of working woman. As a French and Indian War reenactor, she portrays a working class woman in the mid-1700s. Dressed in layers of historical clothing, Smock maintains camp, prepares meal, and shops at settler tents while her husband, Mike, is off fighting the British.

Smock, her husband and his family portray people on the French side. Behrend Blog talked with Smock about reenactments and what life was like for women in the mid-1750s.

How did you get involved in reenactments?

My husband’s family introduced me to it. Back when we were dating, I went over to his house one day and there were wool garments and petticoats all over their living room. They were leaving for a reenactment—the 250th anniversary at Fort Niagara. I was immediately intrigued by the idea. His family noticed my interest and asked if I wanted to join the troupe.

Why the French and Indian War as opposed to, say, the Civil War?

Many reenactors feel that Civil War events are just too crowded. The French and Indian War is often overlooked and so not as popular with reenactors.

What troupe do you belong to?

I belong to Compagnie LeBouef. Mike is a part of the Dauphine Batterie Artillerie de Niagara (Cannon Crew of the Niagara Artillery).  He portrays a soldier in the battery.

What does reenacting entail? What are your days like?

Compared to the schedule and rigor my husband, Mike, has, my day is quite leisurely. I help prep the meals for the day, clean up after meals, and shop at the different settler’s tents. The shops are mostly period accurate, so they are a great place to pick up fabric or other items I need for my reenactment outfits. I have time to walk about and enjoy the battles. My favorite is the Battle of La Belle Famille in which the British ambushed a French relief force just outside of Fort Niagara. There are children in our troupe and I really enjoy playing common period games with them like Shut the Box.

Where do you do reenactments?

We really enjoy going to the Fort Niagara reenactment, near Youngstown, New York. It feels like home for us. We also like the event in Cook Forest. We hope to make it to some other events, too, such as Fort Ligonier in Ligonier, Pennsylvania. 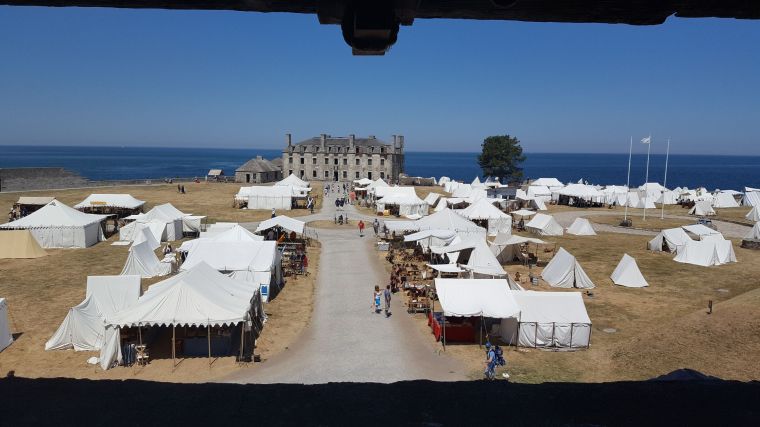 Where do you get the outfits you wear?

I make them with help from Mike’s family as they are much more knowledgeable about sewing 1750s-era clothing then I am. You can certainly purchase period accurate clothing, but it is not cheap. Sometimes, when it comes to elaborate clothing, the idea of sewing it myself is daunting, but the hand-sewing part is cathartic to me.  If I ever run into trouble, there are many women I can turn to who are involved with reenacting and have plenty of experience making their own outfits.

What do you enjoy about reenacting?

I would say it is a tie between being disconnected from technology and the complexity of modern life and the joy of being immersed in living history. I love turning off my phone and forgetting about the real world for a weekend, and I love watching history happen around me.  I remember the first time I watched a battle by myself, I cried because then I understood the true impact of conflict. You can never really get that from reading a history book. Being a part of living history makes you appreciate history in a completely new way.

Is there anything unpleasant or uncomfortable about the experiences?

Stays and layers of clothing. Stays are like corsets; they are stiff and become quite hot when you wear them in warm weather. In addition, they are constricting. It is a running joke among reenacting women that we often have second dinner because as soon as the stays come off, we are all starving. As for the layering, here’s the lineup: First, there is a shift/chemise (an under dress), long wool socks, stays, jacket, kerchief, petticoat (skirt), cap, and apron. As you can imagine, it gets very warm.

As for Mike, his entire outfit is wool, so keeping him hydrated and cool is extremely important. I provide him with a lot of cooling towels and water throughout the day.