Editor’s note: Far from Home is an occasional series in which we document a year in the life of international students at Penn State Erie, The Behrend College.

He couldn’t be more excited.

The first-year mechanical engineering major will leave on Dec. 21 to return to Dubai after completing his first semester at Penn State Behrend. It’s his first time traveling alone, and he knows he may be in for some long, uncomfortable and boring plane rides.

But his thoughts are on being reunited with his family and friends, and that’s all that matters right now.

“Recently, I’ve been really homesick. I want to see my friends, speak my native language and eat my mom’s food,” Elhadary says. “I thought I’d be stronger than this, but I just want to go back and do the things that I would normally do.”

That’s not to suggest that he has not enjoyed his first semester at Penn State Behrend. It’s actually the contrary as Elhadary has quickly developed into a campus leader at the college. He serves as a SGA senator, chairperson for the International Student Organization, promotional coordinator for the Muslim Student Association, and he is active in club soccer.

“I can’t wait to tell my friends about my experience,” Elhadary says. “When I came here, I didn’t know what to expect. I only saw America in movies and television, but it’s been amazing. Maybe I can even encourage my friends to come here next year.”

Elhadary is excited to return home for other reasons as well. For starters, he’s never had a greater appreciation for the homemade food his mother, Maha, makes than he does now.

“I miss my mom’s food so much. The taste, ingredients, spice — all of it is so good,” he says.

His father, Mahmoud, recently purchased a new Ford Expedition, and Elhadary longs to take the new wheels for a spin.

He also knows he’s not the only one who has been busy these last four months. He’s excited to catch up with his 16-year-old sister, Safinaz, and hear about the new things in her life.

“I’m very close with her, and I’m sure she has a ton of things to tell me,” Elhadary says.

Elhadary will be in Dubai until he leaves to return to Erie on Jan. 9. He says the three-week break will just what he needs to recharge his batteries before the start of the spring semester.

And just as he now misses Dubai, he says he is sure to miss Erie while he’s gone as well.

“I have so many friends here (at Penn State Behrend), and I’m still making friends too. It’s just been awesome,” Elhadary says.

Moustafa Elhadary did not know much about Penn State when he arrived in the United States for the first time this summer.  Everything from the weather to American college coursework was uncharted territory.

But he knew about one of the school’s greatest traditions, and he knew he wanted to be part of it.

“There were a lot of things I wanted to do this year, and going to a football game was one of them,” says Elhadary, a first-year computer engineering major at Penn State Erie, The Behrend College. “It’s been on my bucket list for quite some time. I mean, it’s Penn State.”

He got his wish on Nov. 1, when he and friends took a bus from Penn State Behrend to University Park to watch the Nittany Lions’ game against the University of Maryland.

In Dubai, Elhadary’s home since 2007, American football is all but a myth. Fùtbol, better known as soccer in the U.S., is the most popular game there, and everyone is encouraged to participate and follow the sport. For Elhadary, football was a welcomed change.

From the moment he entered Beaver Stadium, Elhadary was overwhelmed by the sheer spectacle of a football Saturday at Penn State.

“I was really impressed by the number of people there. There were just tons of people,” he says.

He was further astounded once the game began. First downs, turnovers, illegal procedures — all of it was entirely new for Elhadary.

“At first, I had no idea what was going on,” he says. “I didn’t even know if we were winning or losing, so I just followed my friends’ lead.”

As the game continued, things became clearer. With each ensuing cheer and boo, Elhadary began to feel as if he was a part of something.

This synergy was especially evident with 3:18 left in the third quarter when Christian Hackenberg threw an eight-yard touchdown to Jesse James to give Penn State a 16-7 lead. Elhadary says it was even more noticeable after Maryland took the lead with less than a minute left in the game.

“It was almost as if everyone in the stadium had the exact same thought inside their heads,” he says. “They were angry at times. Then they were really happy at other times.”

Elhadary says he was upset that Penn State lost 20-19, but he was happy he was there to see it.

His football knowledge remains a work in progress for him, but he’s committed to educating himself; he’s already planning on attending the Michigan State Blue Out game on Nov. 29.

He has also learned one of the favorite pastimes for football fans: trash talking.

Moustafa Elhadary had the perfect plan. He and his friends, Khalifa, Saeed and Murrawi, were all going to attend Penn State together.

While they would be enrolled at different commonwealth campuses, they planned to reconvene regularly on weekends to travel, attend football games and sightsee. The group had it all mapped out, and thought it was the perfect way to make Penn State feel like home away from home.

Then came some somber news.

“In mid-August, my friends were drafted into the United Arab Emirates Army,” says Elhadary, a first-year computer engineering major at Penn State Erie, The Behrend College. “It’s mandatory that they serve in UAE’s military for one year.”

Elhadary, who has lived in Dubai since 2007, was ineligible for the draft since he is a native of Alexandria, Egypt. While he did not have to serve, the fact that his friends would not be joining him in Pennsylvania was hard to accept.

“I was very surprised to hear the news,” he says. “My friends and I had talked about doing this for years. We were planning on seeing each other every two to three weeks and meeting up at a different Penn State campus each time.”

Rather than dwell on the negative though, Elhadary opted to focus on the positive.

Everything about the United States has been new and exciting for him, and he’s pledged to make the most of it.

“I try to get out of my comfort zone,” he says. “I’ve made my own little community here. What happened with my friends was actually kind of a good thing because I would not have socialized as much if they were here.”

Elhadary is a member of Behrend’s International Student Organization and Muslim Student Association. He plans to become a resident assistant next semester.

He has even experienced some physical changes since enrolling at the college. He can thank his karate class for that.

“I gained some muscles,” he says with a smile. “I know how to defend myself now.”

He says he still gets homesick and misses his parents and sister, Safinaz, but he works to find other things to occupy his time.

“I try to keep myself busy all day. I only come home to sleep, and then I’m back up for class the next day. If I were to just sit in my room, I would only get sad and depressed,” Elhadary says. “I still talk to my parents but only a few times a week. They think I’m trying not to call them, but I’m actually just very busy.”

This December, during winter break, he will return home to see his family. Elhadary is looking forward to the visit, but he says he will be happy to return to Erie for the start of the spring semester.

And he has learned that his friends who are currently serving in the military are planning on enrolling at Penn State Behrend when their service time is up.

“I really like Penn State Behrend. High school was fun, but this is a whole new level,” he says. “People talk about culture shock, but for me, there was no culture shock. It’s just culture, but a different one.” 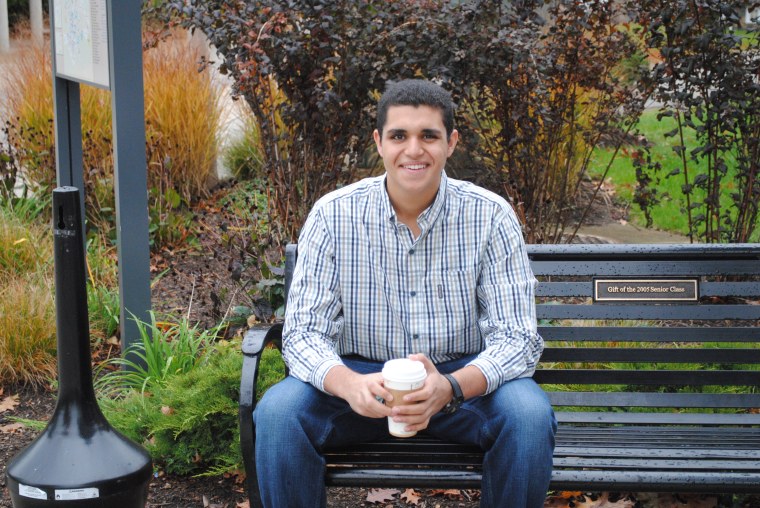