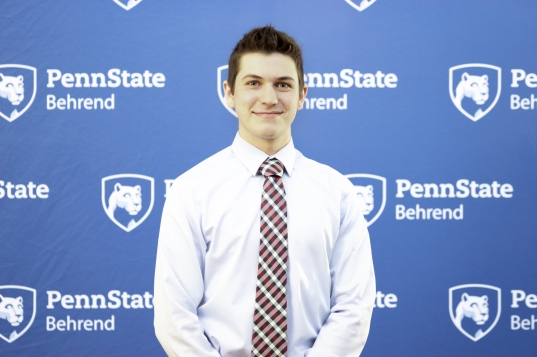 Some of the world’s greatest scientific discoveries have been happy accidents. An experiment goes not quite as expected, and the scientist says something like, “Huh, that’s weird.”

For many, that moment comes after years, even a full lifetime, of work. For some, like Mechanical Engineering senior Ethan Fontana it came in the first year of college in a class outside of his major. (Huh, that’s weird.)

Fontana, a native of Lower Burrell, Pennsylvania, had passed college-level physics in high school thanks to a dual-enrollment AP course, but he needed a lab credit for the course to be accepted as a replacement for PHYS 211: Mechanics at Penn State.

He talked to Dr. Chuck Yeung, professor of physics, who helped Fontana craft an individual study course that would meet the college’s requirements. While working in the lab independently on an assignment involving a ticker tape timer, an apparatus used in introductory physics courses, Fontana noticed something odd.

“I was obtaining inaccurate and inconsistent values of gravity,” he said. “I approached Dr. Yeung about it. He was unable to find anything about the issue online, so he suggested we do a research study on it.”

“After rigorous hours in the lab, performing trial after trial, we finally concluded that an external friction force was present in the apparatus,” Fontana said. “Better yet, we were even able to calculate it with minimal uncertainty.”

Conclusion reached, Fontana worked with Yeung to produce a poster for the Sigma Xi Undergraduate Research Conference where they tied for first place in the Physics/Chemistry division.

“We were both sort of amazed because I was only a first-year student at that time,” Fontana said.

Jonathan Hall, associate teaching professor of physics, said the ticker tape timer has been used in introductory physics classes in high schools and college for decades.

“It is a useful pedagogical tool to introduce important concepts of motion, such as velocity and acceleration, to students,” he said. “I was astounded to find no articles in physics education journals about the results to expect or suggested best practices when using a ticker tape timer to measure motion.”

So the three collaborated on a paper, with Fontana as the lead author. It was published in the May issue of The Physics Teacher.

“I think the paper fills a gap in physics education literature, and will be a helpful resource, especially to new physics teachers,” Hall said. “Ethan is a remarkable student. It’s quite unusual for a student to take their first college physics lab and end up as the lead author of a peer-reviewed scientific paper.”

Fontana is looking forward to getting his Professional Engineering license and a job as a mechanical engineer in the Pittsburgh area after his graduation in May of 2021.