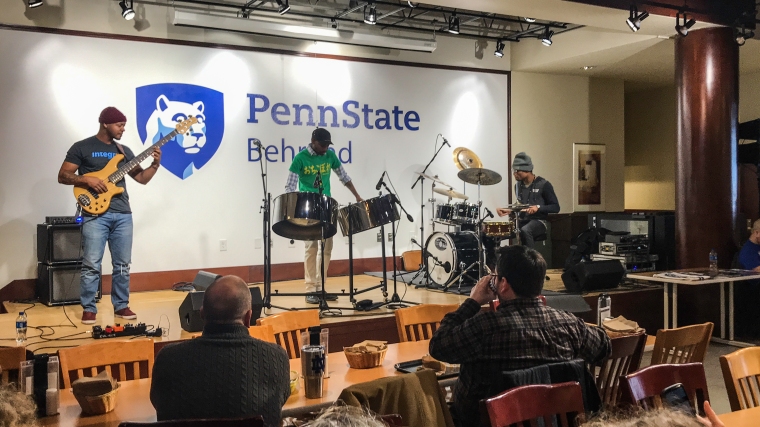 The Jonathon Scales Fourchestra graced the stage at Bruno’s Café Wednesday, Feb. 13, as part of the Penn State Behrend Rhythm of Life series, which brings diverse cultural performances to campus.

The Fourchestra also includes bassist E’lon JD and drummer Maison Guidry. Blending melodic bass riffs, hard drum beats and the fluctuating tones of the tinny steel drum, they capture a sound that is unexpected. The range of the instruments is astonishing. What may seem more akin to Caribbean beats also presents a deep and mellow tone that tells its own personal story. The band, on tour outside of their regular stomping grounds of North Carolina, provided insights into music, life and the trials and tribulations of living life while producing your art.

Scales’ first introduction to music was the saxophone which he played throughout high school. He then proceeded to join the drumline. In 2002, after leaving for Appalachia State, he begrudgingly agreed to audition for the Steel band after much convincing from his friends. This would lead him on a path towards passion for the steel drum. That path however, didn’t come easily.

“I had a period of time during November 2006 where I told myself I’d write a song every day ,” said Scales. “I only booked two shows in that period, and I needed something to keep me sane during my ‘starving artist’ phase of my life. Well, that only lasted about six days, but I did get something out of it: This song.” Scales followed with his piece, “The Longest November.”

With somber undertones and light, jazzy beats, it encapsulates the feeling of being alone and the burden that comes with performing your passions and art at times. This song, along with the rest that were played were purely instrumentals. However, the audience could immediately feel the weight of his story as the tempo of the music grew from a light plucking of the bass to a strong upbeat blend of all three performers with the steel drum taking lead. Scales said, “No matter what, I never felt like I was drifting away from my art. I had rough times. At one point I worked in a factory for five years, but it was a means to pursuing what I really wanted to do.”

One moment stood out: As E’Lon JD plucked a light bass riff, a hush fell over the room.

“I call this musical prayer,” Scales said, “I’m not a very religious man, but I do believe we all have something inside ourselves that wants to do well and feel well. I wanted to write a melody that I could come back to anytime I was feeling lost.” The melody blended into his song “Fake Buddha’s Inner Child”.

This song is Scales’ psychological concept (Which he believes will be in psychology books someday, and told any psychology students to write about it someday). This idea assumes that we all live with an outer shell, much like Buddha, that is large and unburdened by the outside world acting upon it, whether it be stress, harsh words or anything that causes discomfort. But when that outer shell dissolves, it reveals the fake Buddha’s vulnerable inner child. We don’t like for it to be seen, but it’s always there below that outer layer.

The Fourchestra’s sound and Scales’ philosophical and meaningful stories were met with applause by attendees. The stories Scales told were mirrored by the sound of steel drums that somehow were just as understandable without a single word spoken throughout the song.

The Rythym of Life Series’ next performance will be on March 12, at noon in Bruno’s Cafe where we will be hosting the Barleyjuice Irish Band; a pan celtic acoustic rock band from Philadelphia PA.