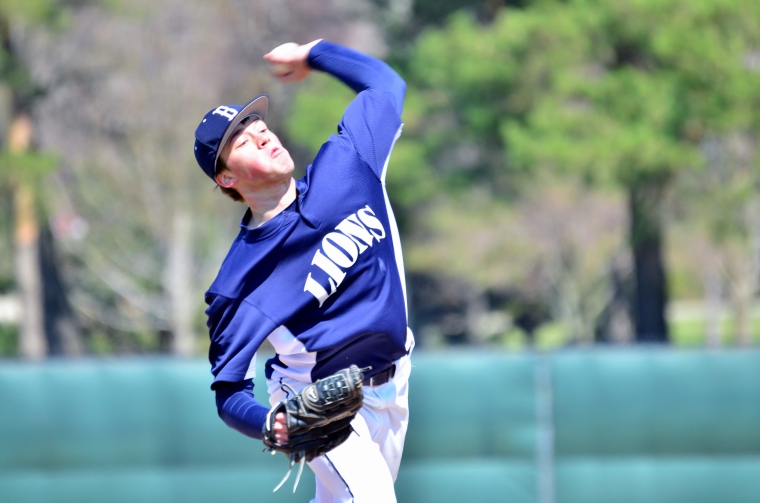 One by one, Jack Herzing sent them down. Between the left-hander’s strong fastball and biting curveball, Penn State Altoona hitters found themselves helpless at the plate.

When the April 6th game had finished, the Penn State Behrend pitcher had struck out 16 batters, tying the school record set in 2001 by Troy Williams.

His source of motivation that day came from an unexpected place — fear.

“In the back of my head, there was just this fear of getting rocked. It’s happened to me before, and it’s a very bad feeling when you’re up there getting hit around, and I was really motivated to get out there and help our team win,” Herzing said.

The Lions did win the game, defeating Penn State Altoona 4-1 in the AMCC contest. Herzing’s strong performance earned him recognition as Louisville Slugger National Player of the Week, but it was just a snapshot of what’s become a breakout sophomore season for the St. Marys native.

Overall, Herzing is 7-1 with a 2.82 ERA in 44 1/3 innings of work and leads the team with 58 strikeouts while averaging 11.69 strikeouts per game. His success has given a huge boost to the Lions, which own a 23-10-1 record and begin play in the AMCC Championship Tournament on Friday, but the seeds to Herzing’s 2015 breakout had been planted at the end of last year.

While he showed glimpses of his talent during his first year as a collegiate player, Herzing says he felt a need for improvement.

“After my freshman season, I really wasn’t pleased with how I performed,” the project and supply chain management major says. “The day after I came home (from college), I started a new lifting routine to get myself ready for the next season.”

The extra time in the gym has paid dividends for Herzing, who is penciled in to start the Lions’ first game   of the AMCC Championship Tournament against Mount Aloysius.

“Herz has been big time for us this spring,” says Behrend head coach Paul Benim. “Our assistant coach Jay Condit has done a tremendous job of helping Herz evolve, simplifying his process. Herz has really focused, stepped up and elevated his performance, especially after the team lost three senior pitchers from last year’s ECAC Championship team.”

Perhaps no one is more familiar with Herzing’s mentality on the mound than teammate Brian Bohman, who has caught every one of his games this season. As a catcher, Bohman is often charged with keeping Herzing calm, even when things turn sour.

“Jack is that bulldog out there,” Bohman, a sophomore history major, says. “He wants to go 110 miles all the time, but sometimes you have to slow him down, say a little joke and get on with it. We work really well together.”

Herzing credits Bohman with much of his success.

“They say it’s 50-50 catchers and pitchers, but it’s really 60-40 catchers, if not more,” he says. “Bohman has been so great this year. He studies the batters. He knows where we should throw it, and I just throw it where he wants me to. He deserves most of the credit.”

While he’s clearly very serious with regard to baseball, there is another side to Herzing, and Hunter Hux will attest to that. As the only left-handed pitchers on the team, Herzing and Hux immediately developed a bond, but it goes beyond baseball.

“We’re the two goofiest kids on the team. We’re always laughing and cracking jokes,” Hux says. “We saw this one story online called ‘17 Reasons That You and Your Best Friend Are Joey and Chandler,’ and we started crying laughing afterwards because it described us perfectly.”

Hux is one of Herzing’s greatest supporters, and he has high hopes for his friend’s future. Last year, former Behrend pitcher Chad Zurat signed a professional contract with the Colorado Rockies organization.

That leaves big shoes for any Behrend pitcher to fill, but Hux says Herzing could be the guy to do it.

“If anyone on this team has the potential to do that, it’s Jack,” Hux says. “If he just develops a third pitch, there is no ceiling for him. And if Jack decides he wants to do it, I think he will.”