Penn State Behrend’s class of 2016 is ready to make its mark on the world!  We’re proud of our students and the things they’ve accomplished and learned while here at Behrend.  Over the next couple months, we’ll be introducing you to a few of our remarkable seniors who have overcome challenges, pioneered new technology, participated in important research projects, and left an impression at Penn State Behrend. 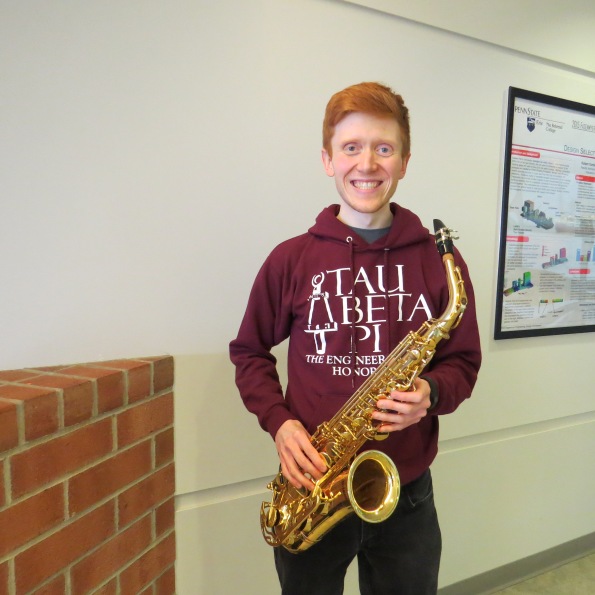 Proudest accomplishment at Behrend: As president of the engineering society Tau Beta Pi, I led an expansion of activities that included bringing a speaker from NASA and a Pi Day charity fundraiser. I also was president of Behrend Robotics, involved in Omicron Delta Kappa and a musician for the student theatre production of “The 25th Annual Putnam County Spelling Bee.” I am also involved in Omicron Delta Kappa.

Not-so-secret superpower: I am a musician, composer, orchestra member and conductor. I have played with and conducted orchestras for several community theatre groups, including the Erie Playhouse and Lake Effect Theatre. I like playing in pit orchestras because the books usually are written for many instruments (I play bassoon, saxophone, clarinet, and flute), which challenges me and improves my abilities.

Spirit in spades: I also orchestrated part of “Spirit of Erie,” a 200-actor pageant created and produced by an amazing team from the Erie Playhouse as part of 2013’s Oliver Hazard Perry bicentennial celebration.

Advice for current students: Whatever you decide to major in or do in your spare time, pursue what makes you happy. The rest will follow.

Jordan plans to find work as an engineer or project manager after his graduation in December, but hopes to own his own business someday.