Penn State Behrend Finance majors Paige Espenshade and Jared Orr recently attended TD Ameritrade Institutional’s National LINC conference in Orlando, Florida, where they were able to get an insider’s view of their chosen field of study.

Espenshade and Orr, who were accompanied by Eric Robbins, lecturer in finance, were two of fifty-six financial planning students from twenty-eight colleges and universities who attended the annual conference in late January.

While there, they had the opportunity to explore job opportunities and connect with more than 3,000 financial advisors and other financial services industry professionals and experts from across the nation. 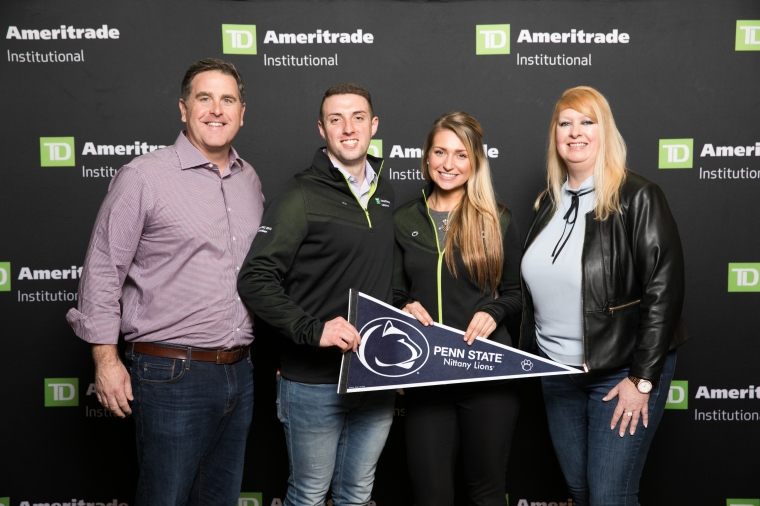 TD Ameritrade is a leading provider of brokerage custody, technology and practice management services for more than 6,000 independent registered investment advisors (RIAs). Since 2007, the firm has been inviting undergraduate financial planning students and their program directors from schools across the U.S. to attend its annual conference, covering travel and hotel expenses for them to do so.

Being Penn State students, Espenshade and Orr garnered special attention from some alumni in the finance industry.

“I was very honored to be actively sought out by alumni and advisors looking to talk specifically with Penn State students,” Espenshade said. “I spoke to an alumnus with an alternative investment firm as well as one with a firm in North Carolina. Altogether, I exchanged contact information with about ten advisors and five vendors.”

“Throughout the week I was able to learn about the role of wholesalers, which is a division of the industry that I had never been exposed to,” Orr said. “I now understand the importance of this niche and have a greater understanding of the financial services industry as a whole.”

The students also participated in smaller breakout sessions and panel discussions on investing and evolving as a financial advisor, and attended networking events with advisors and leaders of our firm, including Tom Nally, president of TD Ameritrade Institutional, and Kate Healy, TD Ameritrade’s managing director, Generation Next.

Both Espenshade and Orr say the trip exceeded their expectations.

“It was an amazing event that has had a positive impact on my both my professional network and my awareness of the financial services industry as a whole,” Espenshade said.

“It was a transformative experience,” Orr said. “I now have a better understanding of the different roles within the Registered Investment Advisor (RIA) industry,” Orr said. “The conference exposed me to several aspects of the industry, and because of this, I was able to see what a great community RIAs across the country have created. I hope to attend the conference one day as an RIA so that I, too, can give back to the students as the advisors did for me this year.”