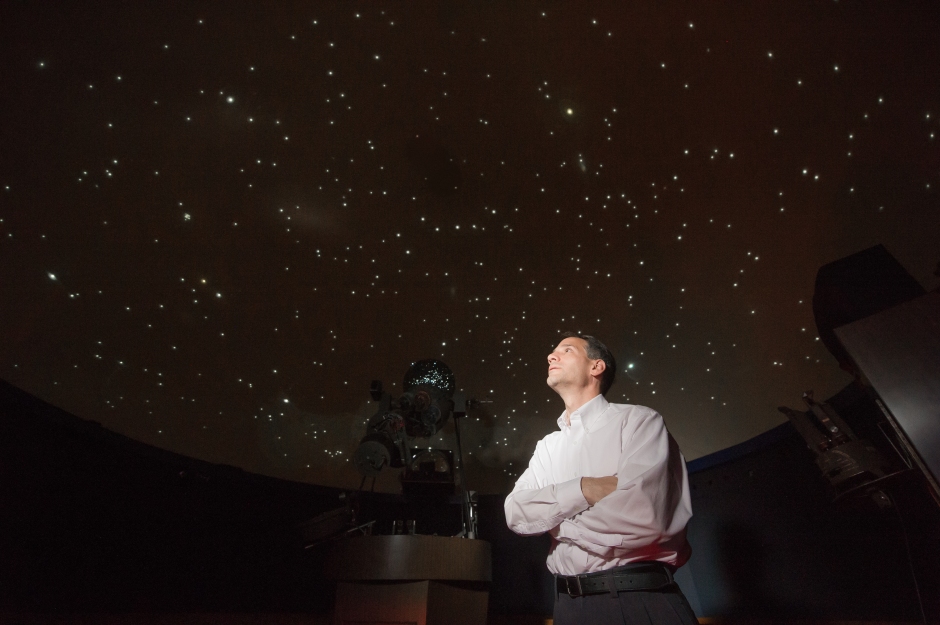 In an uncertain world, it helps to keep your chin up. Way up. Tipped to the sky, in fact. There’s nothing like the vastness of the heavens above to inspire awe and put one’s existence on planet Earth in perspective: Just one tiny human on one small planet contemplating millions of planets and solar systems spinning tens of thousands of lightyears away.

When you really delve into it, space science is mind-blowing and, frankly, who among us couldn’t use a distraction these days? Yahn Planetarium at Penn State Behrend has just what you need, and you can find it online, for free.

“It’s been difficult for the planetarium during this time as we normally thrive on school groups and the public coming in to experience the immersive planetarium,” said Jim Gavio, planetarium director. “But, like many educational facilities, we have adapted to remotely teaching astronomy and space science.”

Gavio has been recording presentations and posting them online at behrend.psu.edu/yahnplanetarium. He is also doing monthly star talks, in which he guides viewers in looking at the current night sky in the Erie area, as well as occasional special presentations, such as one on SpaceX’s recent Demo-2 launch and one on the basics of using a telescope.

His largest virtual group so far was 130 middle school students this spring.

“The teacher sent me questions from the students in advance, which made for a smooth presentation, in which I could focus on some things they were learning at that time. The teacher told me that she, the parents, and the kids were thrilled to have the experience as it gave them a break from schoolwork and an event to look forward to.”

Speaking of looking forward, Gavio has been using the downtime at the planetarium to develop new programming and to do minor maintenance work on the facility.

“The planetarium has been going nonstop for six years, and we’ve had more than 46,000 visitors in that time, so the space is showing some wear,” Gavio said. “While we’d much rather have Yahn Planetarium open, closing it to visitors has given us time to do some repairs and improvements.”

If you need a good reason to get lost in the stars, Gavio has one for you: NASA will be launching another rover to Mars sometime during the launch window of July 20 to August 11.

“The rover will be looking for signs of microbial life on Mars,” he said. “Another really exciting aspect of the rover will be the small helicopter drone that it carries that will fly around on Mars. This is a first and will be very exciting to watch.”

Not into rovers? How about comets?

“During July and August, we also have Comet NEOWISE which looks like it will be pretty visible to people if they choose to look for it,” Gavio said.

He warns, though, that comets can be tricky.

“Sometimes we think they may be easy to see, then they fizzle out,” he said. “Comet NEOWISE won’t be as noticeable as Comet Hale-Bop was back in the late 1990s, but you should be able to see it with the naked-eye or better yet, with a simple pair of binoculars. In mid- to late-July, it can be seen low in the northwest after sunset. As we head into August, it will climb higher and further from sunset so that it will be in a darker sky. If you’ve never seen a comet, this is one of the best chances we’ve had in long time.”

So, get that chin waaaay up because there’s always something exciting going on in the skies above you. Get lost in space for a little while with Yahn Planetarium.