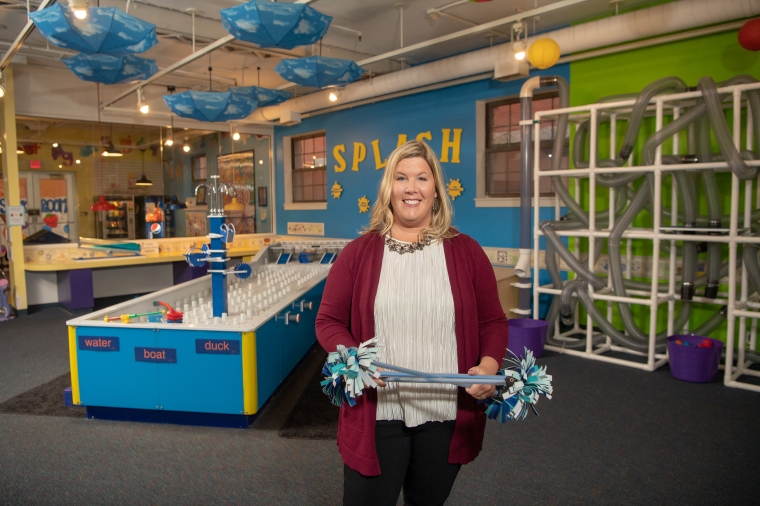 Ainslie Brosig, a 2001 Communication graduate, was recently chosen to receive the Behrend Commission for Women’s 2019 Woman of Impact Award.  The award honors women who are significantly involved with Penn State Behrend and have served as a positive force in their community.

As Brosig, executive director of the ExpERIEnce Children’s Museum, accepted the award at a luncheon at Behrend on Wednesday, the first thing she did was share the spotlight.

“I feel like I get all the credit, but it’s because of all the awesome work that they do,” she said, gesturing to members of her museum team seated at a nearby table. “They make me look good.”

Also in attendance at the luncheon were several of her former professors including Dr. Rod Troester, Dr. Miriam McMullen-Pastrick, Dr. Colleen Kelley, and Cathy Mester, who Brosig remembered had given her a “B” in her class.

She would surely get an “A” today. Brosig is credited with breathing new life into the children’s museum, which was struggling to stay open when she took the helm five years ago.  Brosig and her staff made slow and steady improvements as well as developing corporate and community partnerships that ultimately helped the museum double attendance and triple memberships.  The increased activity has led to even bigger things: Brosig just announced plans for a $15.1 million expansion and renovation of the children’s museum.

A mother of three, Brosig said the most rewarding part of her job is providing opportunities for families to have fun together.

“Children remember their mom going down the slide or their dad helping them build a dam in the water table,” she said. “Those types of interactions are precious and few for many families today.”

This year, Brosig worked with Melanie Ford, director of the college’s Youth Education Outreach program, on a partnership that allowed Behrend’s College for Kids program to offer week-long STEAM (Science, Technology, Engineering, Art, and Math) camps for youngsters at the ExpERIEnce Children’s Museum.

“Up until this summer, College for Kids had not been able to offer a lot of programming for very young kids,” Brosig said. “Of course, that’s what we specialize in, so we were happy to fill that need.”

Ford spoke highly of Brosig’s leadership skills at the luncheon: “You’ve heard the adage that it takes a village to raise a child,” Ford said. “Ainslie is making a huge impact on the children in our village through her work at the museum.”

Communication alumna Ainslie Brosig ’01, executive director of the ExpERIEnce Children’s Museum, center, was awarded the Behrend Commission for Women’s 2019 Woman of Impact Award at a luncheon in November. Brosig, center, was joined by some of her former professors, from left, Cathy Mester, Dr. Rod Troester, Dr. Miriam McMullen-Pastrick, and Dr. Colleen Kelley.