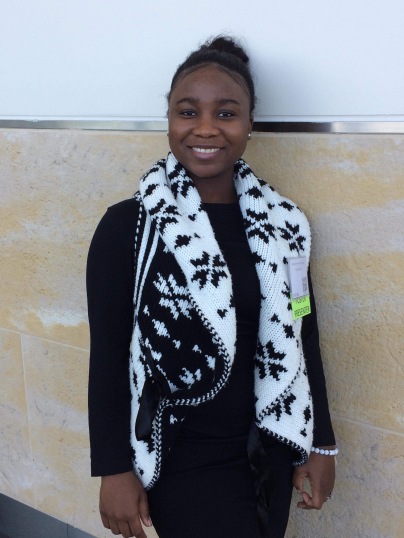 Has your curiosity ever led you down a rabbit hole? It starts with reading something online and then you have a question, so you open another browser window and Google it. Next thing you know, you’ve lost forty-five minutes of your life researching how almonds grow (on trees!) or how spiders survive winter in northern states (in eggs!).

An inquisitive mind is an asset for students when it’s channeled toward topics in their field of study. A need to know more can lead to opportunity.

It did for Efua Crentsil, a senior nursing major, whose interest in a class project spilled into independent summer research work, which led to an invitation to present her work at two different industry events.

Crentsil, a native of Ghana, began researching whether nurses preferred to work with nurse practitioners or with physicians and what impact that had on their job satisfaction for her NURS 200W Principles of Nursing Research and Evidence-Based Practice class. The project piqued her interest and she continued working on it after the class was over.

“I wanted to know more and look deeper at the subject,” she said. “Dr. Alison Walsh (assistant teaching professor of nursing) had been asking if any nursing students wanted to develop a research project, so I told her I’d be interested.”

Walsh says Crentsil exceeded expectations. “She took her evidence-based class project and continued to develop it into a systematic review—Job Satisfaction in Registered Nurses: The Effect of Working with Nurse Practitioners Compared to Physicians.”

While Crentsil did not receive academic credit for her research work, she was rewarded with an invitation to present her work at the Annual Scientific Sessions of the Eastern Nursing Research Society in New Jersey.

That invitation, in turn, led to a second opportunity to speak at UPMC Hamot Hospital’s Research Symposium in Erie where Crentsil won the Student Award for her work, which came with a $250 education scholarship.

Crentsil said she used existing data from four online databases to do her research work, but that next she would like to collect her own research data.

“I did informal polling and observation while I did an internship at The Cleveland Clinic this summer, but I primarily relied on existing data,” she said.

Crentsil said her research showed an 80/20 percent split with the majority of nurses reporting higher job satisfaction working with nurse practitioners than with physicians.

“This was mostly due to communication,” she said. “Nurses felt that nurse practitioners listened to them more and gave them more independence and respect. Those who reported higher satisfaction in working with physicians said they preferred doctors because they tended to be straight to the point, more confident, and more knowledgeable than nurse practitioners.”

Crentsil has reason to be interested in nurse practitioners and research: She sees both as potential career paths.

“I wanted to be a nurse practitioner, but now I’m considering being a nursing researcher because if institutions can see why they should make changes, they’re more likely to do so,” she said. “The research has to be done first.”

Crentsil, who graduates on Friday with a bachelor’s of science degree in nursing and a minor in women’s studies, is currently considering several job offers. She plans to stay in the United States for a few years and return to graduate school after she gains nursing experience.

Crentsil is a recipient of the Jack Kent Cooke Foundation scholarship, the Penn State Behrend Chancellor Scholarship, and a Special International Grant-in-Aid (SIGIA). “I am so thankful,” she said. “I truly would not be here if not for this financial support.”