Twenty-four students and four advisers from Penn State Behrend are participating in an Alternative Spring Break service trip to Beaumont, Texas. The group will be helping residents recover from the catastrophic flooding that occurred as a result of Hurricane Harvey, which hit the greater Houston area in August of 2017, causing at least $125 billion in damages and claiming 108 lives. Behrend’s ASB group is being joined by five other Penn State campuses, including Greater Allegheny, Harrisburg, Scranton, University Park, and York.

One of the things the ASB Trip leaders continually stress to participants is to leave their expectations at home.  In other words, if you don’t expect things to be a certain way, you won’t be dissapointed. Be open to anything and go with the flow.

It is solid advice for ASB where so many factors are out of your control and things never go quite the way you think they should.

Each morning, we meet at the Operation Project Blessings trailer for a brief orientation before receiving our day’s assignments. The woman who doles out the jobs, stands at a table with a stack of orange folders. Inside each folder is a work order and a few instructions.

When you step up to the table, you get the next folder on the stack. Like spinning a roulette wheel, you hope for the best (a job that suits the talents and taste of your crew).

Some groups, such as Chris Fox’s crew, who were placed on larger jobs, elect to go back and continue work on those jobs, so they don’t change assignments every day but will stay at their job until it’s done, or they request a new one.

Fox’s crewmembers do change as do mine and Chris Harben’s and Will Taylor’s. ASB student trip leaders came up with a great way to be sure everyone gets to know everyone on the trip by randomly assigning different students to different vans/advisers and therefore, crews, each day.

Each van/adviser has one or two ASB trip leaders who stay with that van all week. They are responsible for navigating, sparking or leading conversation among the van, and also the radio (this is a very important–and fun– part of traveling with college students, by the way).

Aside from the trip leader(s) and the driver, the other students in the van change from day to day so that everyone gets to know and/or work with everyone. It’s an ingenious strategy because if we all stayed with the same six people all week, we’d get to know all of them really well, but not the other sixteen students on the trip.

My navigators are Kris Knorr, a Finance major, and Ashley Jankowski, an Industrial Engineering major. They’re both a lot of fun and I’m grateful to have someone telling me what turns to make, even if I continually make them wrong.  It’s cool…we just go with the flow (of traffic), let the GPS recalculate, and get back on course.

Yesterday, our crew was almost all new to me, which is to say that I had not had them in my van before. It’s always a little awkward, at first, as everyone gets to know everyone. And, here’s the cool thing about ASB: after eight hours in together driving, working, laughing, taking turns picking songs to play, and eating lunch together, we all left the van as friends, bonded over shared experiences.

There were at least three times yesterday that I laughed so hard I cried.

The first was when we received our assignment — to remove debris from a woman’s yard as well as a hot water heater, two toilets, and a shower from her home. Kris and I just stared wide-eyed at one another, knowing that none of us in the van has any experience with plumbing or shutting off water/power. Dumbstruck, we stumbled over to the tool shed to pick up our bucket ‘o tools.

After reviewing our order, the woman told us we’d also need some plumbing tools. I quipped to Kris, “And a plumber.”

“You must do, what you think you cannot”

But, remember what I said about no expectations and going with the flow? We took our tools and cooler full of water and lunches and headed for the jobsite to see what we could do.

Her home had the telltale slash of red paint on the front door, a sad reminder of the tragedy of Hurricane Harvey. These red stripes were painted on doors to indicate that the home had been checked for people/bodies after the flood.

Like most who are still dealing with flood damage in their homes, she was not living on site, so she met us there.  Also like every flood victim we have spoke to, she teared up when we asked “How are you holding up?” Her home had stood for about three weeks in three feet of water.

First, we cleaned off the debris on her front porch, lugging heavy bags of trash, building materials, waterlogged suitcases, filing cabinets, and more out to the road. The good news was that her son had already repaired one toilet and the hot water heater, so those things didn’t need removed. That left a toilet and a shower that had to go.

After some investigating, we figured out how to turn her water off, and were able to remove one of the toilets. But, the shower was beyond our capabilities as it required someone with construction skills and a power saw to cut it from the walls.  (Someone with those skills and tools from Community Collaborations International did go back and do it that day for her.)

At 11 a.m., we had done all we could at this woman’s house, so we called in to Operation Blessings HQ for a new assignment.  They sent us to a home five minutes away to help a single mother, Darla, move her possessions from a storage facility to her trailer.

This involved six or seven trips back and forth, filling Darla’s father’s truck, carrying them into her trailer, then heading back again.

There were mishaps. The kind that occur when you use volunteer movers and a short-bed truck. On the first trip the locker, the dolly rolled right out of the back of the truck and onto the highway. One of our crew members rescued it. Then, we had to figure out how to fit it into our van. We laughed most of the short way to the storage trailer. 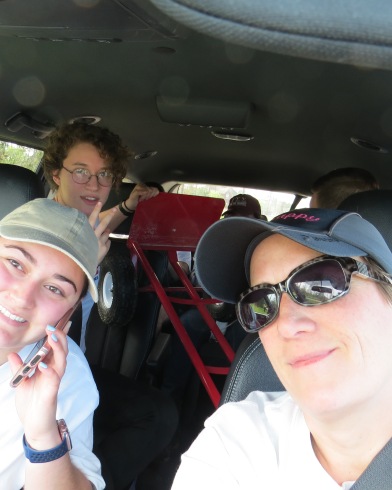 Later, a California King size mattress flipped off the truck and into the same road. We wrestled it back into the truck and strapped it down better that time. There were also some adventures with plastic snakes, swords, and moldy furniture, but this blog post is already too long. Suffice to say, we laughed a lot.

We returned to the church at 4 p.m. to shower and catch up with the other teams and hear about their day:

What does today — Wednesday — hold for us? Who knows. But, whatever it is, I’m sure it will be fine. And, probably quite fun, too.