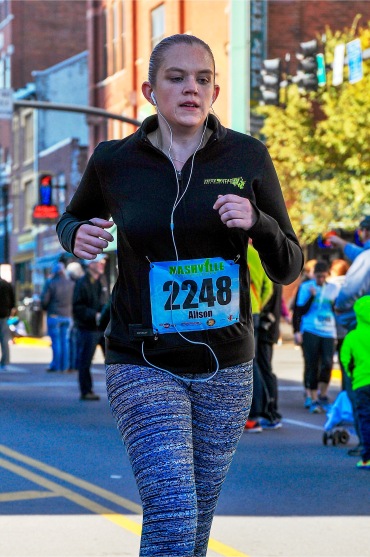 Inspired to start running to help her patients suffering from cancer, Alison Walsh, 34, lecturer in nursing, recently finished a 50-state running challenge—completing a marathon (26.2 miles) or half marathon (13.1 miles) in each state from Alabama to Wyoming.

We recently got Walsh to stop moving for a few minutes (no easy task, we’ll have you know) and tell us about her all-American feat:

Do you still work as a nurse? I work per diem at Saint Vincent Hospital in the float pool, which means I work in whatever unit needs me that day.

When did you start running? I have been terribly un-athletic my whole life! I really did not run seriously until 2009.

Why did you start running? In 2008, I was working on an oncology unit and I was quite connected to my cancer patients. A fellow nurse on that unit asked if I wanted to run a half marathon with her to raise money for the Leukemia & Lymphoma Society, and I agreed. I severely underestimated how hard it would be to run 13.1 miles! That first race was rough. During the race, I remember thinking that I was quite sure I would never put myself through it again!

And, yet, you ended up deciding to do a distance race in all 50 states. How did that happen? There was just no feeling like crossing that finish line. Runner’s high is a real thing and I became an addict. I did my first full marathon in 2010.

How long did it take you to accomplish a race in all 50 states? It took about seven years. Last year, I ran the most races—thirteen half marathons.

What was your last state and when did you finish? I checked the last state off my list on October 9 in Wichita, Kansas. I know what you’re thinking: Why wasn’t it Hawaii or someplace more amazing? Poor planning on my part. But Kansas was actually a great race which is part of the fun of doing a 50-state challenge. You never know what nook-or-cranny in this country will surprise you with an awesome experience.

Which was your favorite race/state? Surprisingly, one of my favorite races was the Pittsburgh Marathon in 2010. It’s a hilly course and it poured rain the entire time, and I remember halfway through the 26.2 miles that maybe I needed to reevaluate my life choices. But the crowd support was phenomenal. Despite the rain, every inch of that course was covered with people cheering and screaming no matter how fast or slow anyone was running. Their energy, as well as a beautiful course, made that race unforgettable.

What was your most unique race? In July, I went on an Alaskan running cruise! Instead of excursions and the usual activities you do on a cruise, every place we docked, there was a race. The scenery was phenomenal, the locals at each port were very supportive of our races, and it was really cool to hang out with a couple hundred people that were just like me and would sign up for something like that!

Were there any races that you thought were overrated? I have to say the Disney World races. I’d suggest anyone try it once because there’s nothing quite running through the parks and having Disney characters cheer you on! But, when I ran it a second time, I was annoyed by the insanely steep registration price, the early start (you have to be at the start line at 3:30 a.m. because of road closures), and the large number of participants. This is definitely not a race you run to get a good finish time because there are just too many people.

Were there any you didn’t think you’d finish? Why? I injured my knee at Grandma’s Marathon in Duluth, Minn., around mile 15. The pain was terrible. I called my sister mid-race, bawling because it was going to be my first DNF (did not finish). I was inconsolable. I kept saying to myself: ‘OK, just get to the next medical tent and then you can stop.’ But when I got there, I realized I could go a little further, and that happened at each opportunity to stop. When I got to mile 21, I knew I was going to finish. It was my worst time ever, but I finished, despite running on a bad knee for 11.2 miles.

How do you get through a tough race? Are there any mantras you repeat or mind-games you play with yourself? During Grandma’s Marathon someone was holding a sign that said ‘Pain is Temporary, Pride is Forever.’ I think that random stranger holding that sign was the thing that inspired me to finish that race.

Why do you like distance racing? The coolest thing about a marathon is seeing so many different people of all ages, fitness levels, sizes, and ethnicities coming together and sharing an experience. In those few hours, we are all one big family, supporting each other.

Have you had to deal with any injuries? Thankfully, that knee injury resolved quickly and was never an issue again. My first major injury happened in March, when I got bursitis in my hip. It was terrible. I had to stop running for a few months to let it heal, and that was when I really saw how much running meant to me and how much I rely on it as a stress reliever.

What is your training schedule like? I run about four days a week, anywhere from four to eight miles, depending on what race I’m training for and when it is.

What do you enjoy most about running? Why do you do it? It took me years to actually enjoy running. For quite a while, I hated training and only did it for the medal at the finish line. It was only in the past few years, that I realized how much I enjoy running just for the sake of it. It’s a great stress reliever. It also helps me stay in shape and has given me a great excuse to travel to places I never would have otherwise.

What’s your next big goal? I’m not quite sure! I have not run a full marathon in a few years, so I would like to do that in 2017. In January, I’m running the Louisiana half marathon in Baton Rouge. Running and traveling have become a huge part of my life, and I’m not planning to stop anytime soon.

At the Las Vegas Rock ‘N Roll 1/2 marathon, Alison, left, stopped for a photo with “Elvis.”

Alison’s 50 States jacket. States are colored in as they are completed. Alison’s is fully colored now!

Another by-product of distance racing—lots of “bling,” I.e. finisher’s medals.