No matter how vivid the photos or descriptive the lecture, there’s nothing quite like seeing and experiencing another country in person. And, in today’s increasingly global business climate, it’s vital that students be versed in the culture and business practices of international partners. There is much to be learned from seeing how others do it. That’s why, every year, students in the Plastics Engineering Technology program have the opportunity to travel overseas to visit plastics companies and universities and attend a plastics trade show, too.

On Thursday, Oct. 20th, thirty-three PLET majors embarked on a 10-day trip to Germany. We asked them to tell us about their journey. In this blog post, students Ian  Duchene gives us a report from days 2 & 3 of the trip:

We landed in Frankfurt, Germany, at 6:00 a.m. We quickly boarded a train to Cologne (Köln). Upon dropping off luggage at our Youth Hostel, students enjoyed the day out discovering Cologne.

A staple of the city is the Cologne Cathedral where it is claimed the three Wise Men are buried. The cathedral is open to the general public so many students went in to appreciate the walls of stained glass and the rich history and sanctuary of the cathedral.

Another large attraction where students spent some time was the Museum Ludwig across the square from the cathedral. This art museum is home to three floors of artwork with a strong focus on pop art. The main attraction of the museum was that it is home to over 50 Pablo Picasso pieces.

Aesthetically beautiful cobblestone streets lead to many venues and bars where students found delicious meals of bratwurst and doner kebabs. 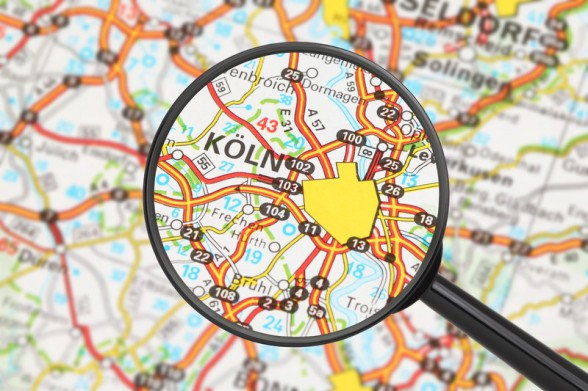 Today marked the second cultural activity day where students were permitted to travel in their own groups across the city doing activities of their choice. With about ten hours under our belts in Cologne, students have already become more comfortable in the environment and getting around the local area on their own.

One group traveled to the nearby Kölner Zoo. Another larger group traveled to a soccer match between Bayer Leverkusen and Hoffenheim. And multiple groups went to the Shokoladen Museum and the Cologne Cathedral with a few groups climbing to the top of the cathedral.

One student remarked “the soccer game was a great experience, the energy in the stadium was intense, and it was interesting to see how a different country passed their free time.” The team that they were supporting was Bayer Leverkusen, but they lost after ninety minutes.  After arriving in Cologne, they learned that Leverkusen is not the home team.  The scarves purchased from the game that represented Leverkusen were quickly removed!

At the Shokoladen (chocolate) Museum students enjoyed plenty of free samples of Lindt chocolate. There was also an exhibit of chocolate rotational molding that really grabbed the groups attention as it is a similar process to plastic rotational molding.