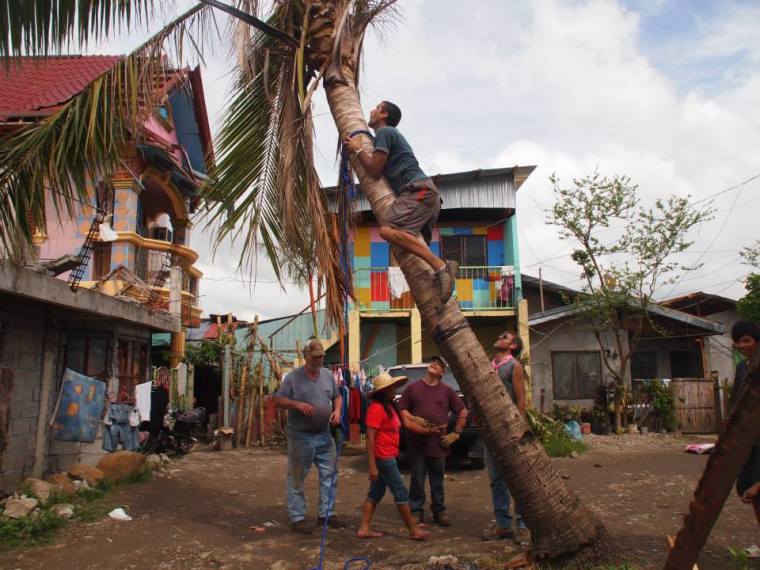 So how’d you spend your winter break?

Catching up on some z’s?

Morales, along with his wife Katie, father-in-law, and another member of the Federated Church of East Springfield, made a trip to the Philippines this December to offer disaster relief to victims of Typhoon Haiyan and the earthquake that hit the island of Bohol.

Through All Hands Volunteers, Morales and his church group set up a relief trip to the island of Leyte in the Philippines. To make the trip, Morales had to give up part of his winter break, but it was an easy sacrifice.

“If they can’t have a nice holiday, then why should I?” Morales said.

The group arrived at Leyte on December 10. A total of 65 volunteers from all over the world joined Morales’ group, and they spent the majority of their time doing deconstruction work. They took down unsafe homes and also cleared out rubble and trees with chain saws.

Morales said the experience was humbling, and that was especially true after his group took a ride on top of a jeepney.

The jeepney, which is the most popular form of public transportation in the Philippines, took Morales to the area that had been most affected by the typhoon.

“Entire blocks were just flattened. You couldn’t recognize anything. You would go miles before seeing actual homes,” Morales said. “A lot of us just went speechless. It’s just hard to grasp because you think of the things back home, and then you see these people who lost everything.”

While the natives may have had next to nothing in the way of material possessions, Morales said they never hesitated to express their gratitude toward Morales and the other volunteers.

“Strangers would buy food for us during work time, and they didn’t have much,” Morales said. “All they could afford was a loaf of bread and a Coca-Cola. You didn’t want to accept it, but it meant everything to them.”

On December 20, Morales and his group then took two ferries to Bohol where they began to focus their relief efforts toward the 7.2 moment magnitude earthquake that had struck the island on October 15.

Once again, the group began to deconstruct homes and salvage materials.

On Christmas Day, Morales and his church group returned to the United States. Morales said the trip had a profound effect on him.

“On Sunday, I didn’t want to go out for an easy run,” said Morales, who is a member of Behrend’s track and field team.  “But if the people from the Philippines can get back up from nothing, then why can’t I go on a three-mile run?”

Most importantly, Morales’ trip to the Philippines may have provided him with a sneak peek at his future. He will graduate in May, and he hopes to use his nursing degree to benefit the less fortunate.

“The only reason I want to get a job in critical care and pediatrics is to utilize that experience in another country where there’s not as much access to healthcare,” Morales said. “Our mission was two-fold. Yes, we went there to help, but it also allowed us to get our feet wet as to what the future may hold. Disasters are going to keep happening, and someone needs to be there.”