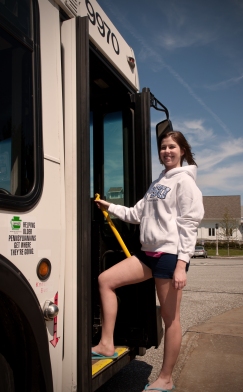 When I started working here two years ago, if you would have told me that engineers would become some of my favorite people to deal with, I’d have thought you sprained your brain doing a few too many Suduko puzzles or something (engineers like those, right?).

Engineers are all about math and science and, well….writers are not. I figured that I’d have nothing in common with these sensible, logical, numbers-loving people.

My mistake was assuming that sensible, logical numbers lovers = no fun.

Engineers do all kinds of fun things around here such as sticking a receiver on the Behrend shuttle  that tracks the bus in real time.  Then, following it up with a hilarious FAQ page that made me giggle for the next three days.

The funny man behind the FAQ is Dr. Chris Coulston, associate professor of electrical and computer engineering, who oversaw the engineering students — Daniel Hankewycz and Austin Kelleher — who worked on this project.  Dr. Coulston is endlessly energetic and cheerful, always entertaining, and has a knack for explaining complicated engineering projects in such a way that anyone can understand (Um, I guess that’s why he’s a teacher).

So, the next time you think engineers are boring, read this.

And the next time you’re waiting for the campus shuttle bus to arrive, check this.

And for the love of the world wide web, stop using Internet Explorer!

P.S. Cool engineering projects aren’t limited to campus. In fact, most of the projects that our students work on are for outside industry partners.  They have helped rescue draft horses, designed award-winning supermileage vehicles, and improved the bubble exhibit at the ExpERIEnce Children’s Museum.